Ivy sent me a meme the other day. It was in block colorful letters and said “Remember that once you dreamed of being where you are now.” This made me smile. There’s something dreamlike about how our lives have turned out. Ivy said she feels the same and suggested looking at my hands to make sure I’m awake. That’s the telltale test which seems to have replaced “pinch yourself.”

It’s not that we have perfect lives. My job entails a ton of brain activity, and hot flashes and too many pets in the bed rob me of a good night’s sleep. I switch between being exhausted and overly energetic. I’m overweight and drowning in credit card and student loan debt. My Five-Year, Debt-Free plan keeps getting extended. The animals are old, most of them, and very costly. Ivy has chronic pain and a future filled with medical uncertainties. Will her disease progress? Will she have a stroke, or need a new kidney? Will her future baby inherit her disease? What if she never lands a high-paying job that will allow me to stop paying her bills?

But beneath all those external situations and possibilities, there’s a tangible sense that we belong exactly where we are, a certainty that’s plunked us into an unwavering state of contentment. 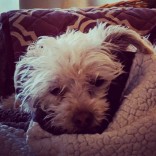 Opportunities are appearing and falling into place with inexplicable swiftness.  I’m writing fiction again after a hiatus of what feels like a year. Ryan’s friend, now my friend, Debbie, has been nudging me to write a web series for a couple of years. I’ve been saying no, resistant for reasons I can’t defend, but she finally pushed me hard enough until I conceded. It helped that only a week or two before, I got to “act” on a reality show/ courtroom drama, a last-minute opportunity that popped up. It was surprisingly fun, and being in the studio, getting “hair and makeup” and improvising lines was alluring. I finally grasped the “acting bug” phenomenon people talk about. When Debbie took me to a studio later, and we brainstormed the series idea with another friend, I left in an exhilarated, manic state, suddenly back to writing, for better or worse, with chronic excitement and boundless energy.

Everything I wanted is finally coming to fruition.

Ivy just got grades for her second semester, the end of her junior year. All As, all year. In her spare time, she joined a band and has been recording with them; and her summer job will be co-manager of a theater camp for kids. All endeavors that feel more fantasy than reality. She meditates every day, does yoga, often by the ocean as waves crash just beyond her.  She has found an inner peace and quiet she never imagined possible. It’s all clicking into place. 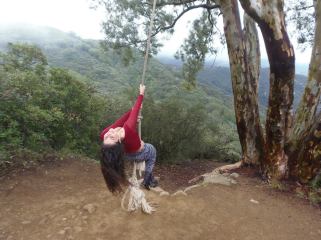 Yet sometimes I have neurotic panic moments when I worry I’ll wake up and be back in another part of my life, where none of this happened. I made so many choices over the years and my life could have turned out differently. This fear grips me sometimes, and despite the inner voice that talks me off the ledge and convinces me this is real, it’s an irrational dread I live with.

When I was in high school, I was dating a boy from Maine. Mean Guy was still with us then and I was about as miserable and hopeless as I ever have been. At one point I came home and told my mother that I was going to quit school and move to Maine. Thankfully she told me no and I listened. But if I had done that, where would I be now? Not in Southern California with Ryan, pets, Ivy, and this life.

When I was a senior in high school, I signed papers to join the Air Force. It was settled. I’d go to boot camp in the summer, get free college, and serve my time at the end. I was going into Military Intelligence because I had a flair for languages. But my mother said no and since I was only seventeen, that was that. She would NOT sign the consent form. She was correct in that by the time I was eighteen that following September I no longer wanted to join the military. But what if I had? I could have been killed. Or maybe I’d have excelled and found myself in a nice little life. I’d have a degree and solid career, maybe a military husband and a rigid, ordered life. But it wouldn’t be this life.

After I graduated from high school, I was supposed to go to college but canceled last minute, which has been mentioned before. I often regret that I didn’t get my degree. I have remorse over this I can’t get past no matter how old I get. But if I had gone, I wouldn’t be here now. Maybe I would have gotten the psychology degree I was pursuing and then gotten a Masters. Maybe a PHD. Maybe I’d have gotten a nice husband and a big house and several kids. Maybe I would have been happy. But I wouldn’t be where I am now and I wouldn’t have Ivy or Ryan or the experiences that make me who I am.

When Ivy was four-years-old, I almost moved to Canada, to Prince Edward Island. I honestly think I would have loved it as I still maintain it’s a magical place that always felt perfect. I would have been happy there, no doubt, but I would have been away from the family that helped me so much when I was raising Ivy. Even so, if I had to pick an alternate life to wake up to, it would be that path. But if I had moved to Canada, Ivy and wouldn’t have ended up here, in this life. I get grief-stricken just thinking about it. 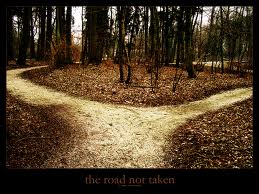 There were a thousand other choices I’ve made over the years, ones I looked back on and regretted. Ones that seemed pointless and foolish, and that derailed advancement in my company or in my writing career. I think of the tears I shed over boys or men who broke up with me, or friends or family members who left me behind.

But those missteps and tears led me here. If I had made even one different decision, I would not be where I am now. In this life where Ivy and I belong, a life that despite its often-ethereal quality filled with uncanny coincidences, is evidently not too good to be true. 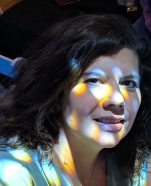 If you’ve ever done a jigsaw puzzle, you know the exhilarating feeling you get when after countless hours and days of adding one piece at a time, first the edges, then the middle and connecting pieces, you get to the point where there are only a handful of pieces left. And your excitement is overwhelming because every piece you pick up fits exactly where you think it should. It’s effortless.  You forget the frustration of the time you spent picking the wrong pieces, the drudgery of working toward something whose completion seemed an impossibility.  Instead you rejoice in the thrill of adding one piece after another with no guess work. It all flows perfectly and each little click into place brings you one step closer to finishing. You know finally, you have achieved exactly what you set out to do. 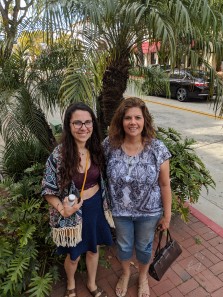 I know this is all real because I just looked at my hands. My life’s path could have led anywhere, but I’m relieved that I ended up exactly where I needed to be.

To finding all the pieces,